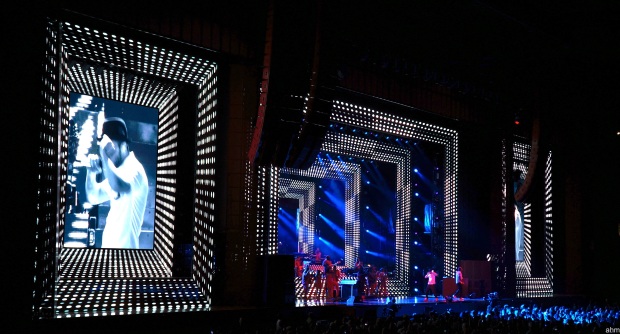 Legends of the Summer is a fitting name. Justin Timberlake, with his boy band turned solo platinum recording artist status, an SNL skit here and there, some golf with Bill Murray, and maybe even a film with Mila Kunis. Then there’s Jay-Z, arguably the biggest Hip Hop mogul, along with being one of the most influential persons in the world, he happens to be a decent business, man. Both of which are fresh off platinum albums, it doesn’t get much better then that. As soon as the two gentlemen stepped on to that stage, this untouchable aura arrived, and infected the building for over two hours.

Situated under a relatively clear Vancouver night sky, nearly 50,000 people shuffled into BC Place to find their seat, and as a soft breeze crept in through the open roof, 9 o’clock couldn’t come sooner. DJ Cassidy spun a mixture of bangers, street anthems and classics to set the mood, before the fade to black. The show opened in identical fashion to Magna Carta…Holy Grail, only this time around, there was a seismic amount of excitement, causing the ground to shake.

Initially I was hesitant as to how the synergy of the show would work, but without fail, two artists of this stature can do no wrong. The following number(s) saw Jay’s “I Just Wanna Love U” mashed-up with Justin’s “Rock Your Body,” giving the evening a unique look. And if that wasn’t enough reassurance, JT uses his best raspy vocals to deliver Jackson 5’s classic “I Want You Back,” not to be outdone by J bringing his own classic “Izzo (H.O.V.A.)” in. After a quick hook for the sexy “Excuse Me Miss,” the man all the way from Tennessee has the stage to himself. “Señorita” brings all the ladies out of their seats, and relationships (at least for the time being). As the 2002 smash hit reaches the conclusion, we all know what’s coming, and with a smirk on his face, Justin tells us “don’t act like you don’t know what the fuck to do!”

Hova joins the panty thief back on stage, as they exchange numbers back and forth, “On To The Next One” for “My Love” and so on and so forth. Even whilst performing their own jams where there’s no involvement required by the other party, the energy level remains sky high. JZ will bop around the stage adding the odd grunt or “yup,” and the reverse sees JT dancing around carelessly while thoroughly enjoying the company. After Mr. Quick Feet heads for the tunnel, the Hype Beast does his thing with six solo joints in a row, including the concert classic “Jigga What, Jigga Who.” Then as Papa Hova heads underground to FaceTime his two ladies, the gentlemen in the building take a backseat to Mr. Timberlake performing seven solo tracks, as hearts literally melt around the arena. “Pusher Love Girl” and “Summer Love” were perfect choices for the ambience in the air, as the crowd began to fears the inevitable conclusion.

Hold up though, the buzz reaches the ceiling when Jay-Z pops back out and hits us with “Dirt Off Your Shoulder,” “Ni**as In Paris,” and “Tom Ford” – which was only 1 of 2 tracks played from MCHG. After a few more, the gentlemen leave only to return quickly for the encore – the obvious choice is what brought this all together; “Suit & Tie,” while the two sip champagne on stage. And for the final number, JT takes on Mr. Hudson’s hook as the two close out a historic evening with “Young Forever.”

I ended up shooting about ten videos from the evening, so i’ve chopped them up and compiled them into just over 10 minutes. Think of it like a trailer, and if you don’t plan on seeing these two when they come to town, I strongly suggest you alter your plans. If you’ve seen the show already, what’d you think?