At just 22 years old, Elena Tonra sings with such controlled anger and conviction, the music elevates above and beyond depressing. The project began just a couple years ago as a two-piece with her boyfriend Igor Haefeli, who holds down the guitar. Percussionist Remi Aguilella found a home within the group a short-time later, and now the world has been introduced to Daughter – a triple threat experimental folk group hailing from London, England.

If You Leave serves as their debut full-length, 10 tracks, with a tracklist containing the same number in words. There’s something to be said in the simplistic beauty that is one-word titles – let the lyrics speak for themselves, let the words take on a life of their own. Let the emotion behind each story and scar sink into your brain without worrying about the name of the song or where exactly it sits chronologically.  Elena confronts her demons with this record through stories and metaphors. Haefeli paints vivid landscapes, as Aguilella intricately places each rush of wind and glimmer of light, while Tonra slowly mends her fragmented heart as she wanders around.

“Drifting apart like two sheets of ice, my love;” the first words you hear paint an unmistakably cold image to set the tone of this journey. Perhaps the following number sheds light on the drifting, a powerful confession of suffocation. “Smother” has the perfect blend of airy and violent, which is exactly where Elena is; stuck between self-deprication while seeking redemption and turtling back into her mother’s womb. Playing perhaps the most obvious role in this ‘broken-hearted’ saga is “Youth”. The imagery is destructively potent, the drum resonates right down to her soul, and the lyricism finds itself on the more accessible side.

Setting fire to our insides for fun (“Youth”)

“Tomorrow” glimmers with distorted guitar riffs reminiscent of The National’s High Violet opener, as the young adolescent triumphantly admits defeat. Igor uses this effective distortion technique on a few numbers, notably most powerful in “Lifeforms.” Ms. Tonra assures us that “underneath there’s a human” over one of the more energetic instrumentals on the album. While this trek through the mangled forest that is her heart leans hard on the sombre state, “Human” convinces the listener there’s a twinkle of optimism in her eye.

Daughter’s debut album is overflowing with lament and sorrow, but with the help of two talented musicians, there’s depth. They turn what could easily border or whiny and tiresome into truth. They make it believable, in turn making us empathetic. We’ve been there ourselves, or had to live through it vicariously. While her ghosts are being exiled one-by-one, If You Leave becomes an album of honest vulnerability and grandeur. 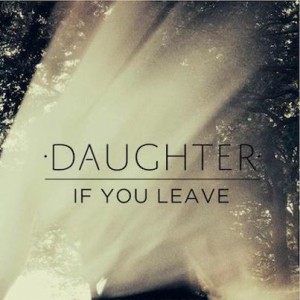 Buy it on iTunes

What are your thoughts on the album?