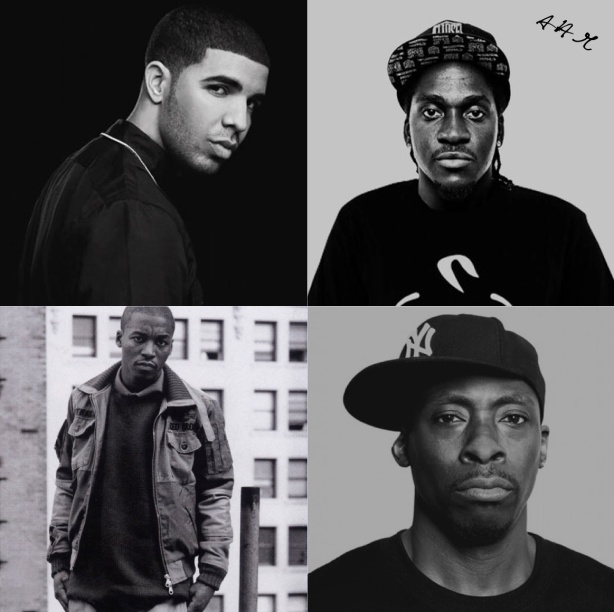 In Hip Hop, there is this constant competition that will never be settled or satisfied. Even the greats couldn’t avoid the turmoil, Jay-Z/Nas, Easy-E/Dr. Dre, and 50 Cent with anyone who scuffs up his sneakers. Think of it like an NBA game, and in two of the latest battles, it’s YMCMB vs. G.O.O.D and Lupe Fiasco vs. Pete Rock.

Pusha T released a track last week “Exodus 23:1,” where he takes shots at Young Money over an ominous beat courtesy of Rico Beats. “Contract all fucked up/I guess that means you all fucked up/You signed to one nigga that signed to another nigga/That’s signed to three niggas, now that’s bad luck.” He’s claiming they all gained success like hand-me-downs. Birdman signed Wayne who signed Drake. Funny thing about that is, Kanye West signed him to the G.O.O.D. Music label just last year. Of course his “former” group Clipse is huge in the underground scene and relevant in the mainstream world. But you have to show progression in today’s industry. When you sit still for too long you become outdated like stale bread. No one wants it. Then you find yourself taking features on Jesse McCartney tracks.

Lil Wayne responded via Twitter with “Fuk pusha t and anybody that love em.” In addition, he dropped a freestyle called “Ghoulish” which was incredibly weak. There was talk about hot butter, banking with Chase  and girls in South Beach with tan lines. Super weak. Watching two guys argue about the Heat vs. Celtics creates more fire. Pusha’s label mate Kid Cudi took to twitter to say “I love my nigga Pusha T, fuck anybody who feel different. We ain’t ho’s out here.”

On an earlier relatable side-note, The-Dream and The Weeknd had a few kind words for each other. The-Dream called out The Weeknd at one of his NYC shows for jacking his style. Weeknd responded on Twitter with some petty comments about him looking like the Hamburglar. I assume The Weeknd felt pretty stupid after, considering Dream’s response was nothing but love, saying he thought the world of the boy. The-Dream dropped the hook on “Exodus 23:1” and The Weeknd is obviously aligned with Drake.

Drake isn’t piggy backing on Wayne and Young Money, in fact he is one of the largest contributions to the label. Selling over 3 million copies over just two albums in the US alone is not an easy plateau to reach. Drake’s debut EP So Far Gone dropped almost 700,000 copies. Pusha’s debut EP Fear of God II: Let Us Pray has sold nearly 15,000 copies.

Being of fan of both these artists work, this beef is a publicity stunt. They were both given opportunities. Someone believed in both artists enough to stick their neck out for them. Mr. Graham has already proven himself in a big way, if this is Mr. Thornton’s attempt to stir up the hype, I guess we’ll just have to wait and see.

Lupe Fiasco’s latest single “Around My Way (Freedom Ain’t Free)” dropped on May 21 which left Pete Rock quite upset. The track samples Pete Rock & CL Smooth’s 1992 debut single “T.R.O.Y. (They Reminisce Over You),” a song inspired by the the death of his close friend Troy Dixon (of Heavy D & The Boyz). Needless to say, the song is obviously close to Pete’s heart. “T.R.O.Y.” samples Tom Scott’s cover of Jefferson Airplane’s “Today” which came out in 1967.

When Pete Rock heard the track on the radio, he took to his Twitter feed, “No disrespect to lupe fiasco and i like him alot but TROY should be left alone. Feel so violated,the beat is next to my heart and was made… Outta anguish and pain. When it’s like that it should not be touched by no one!” Rock later apologized for his rant, said he was just very emotional and the track surprised him. On May 23, he tweeted “I just got off da phone lupe, we worked out our differences and we bout to get it in.” It seemed like all was good, but the beef neglected to stop there.

Lupe joined “Sway In The Morning” to share his side of the story. He explained that they reached out to Pete six months ago with the idea of remaking “T.R.O.Y.” Mr. Rock gave them a conditional yes but said he had to be involved in the project. That was back in November, now it’s May, there was no follow up with Pete Rock and the song was compete and on the radio. So you can understand the frustration for Pete. Being an avid fan of both these artists, it was sad to see it go down this way. I would have to side with Rock on this one and here’s why.

He explained in his long-winded statement that you can expect this behaviour from the labels because they’re machines, but he didn’t expect this from Lupe. Fiasco is one of the most political artists out there, he can make a hit single that includes calling out the President and those in power. His intelligence level is of the higher standard, which he uses to his advantage. Even though there was technically nothing wrong with releasing the track, I would have expected Lupe Fiasco to show Pete Rock a little more respect.

Despite the beef, Pete cooled the fire by saying if they label can respect him, he would love to get in the studio with the Chicago rapper. These two gentlemen have enough respect for one another to put all the drama behind them and get back to what matters, the music.