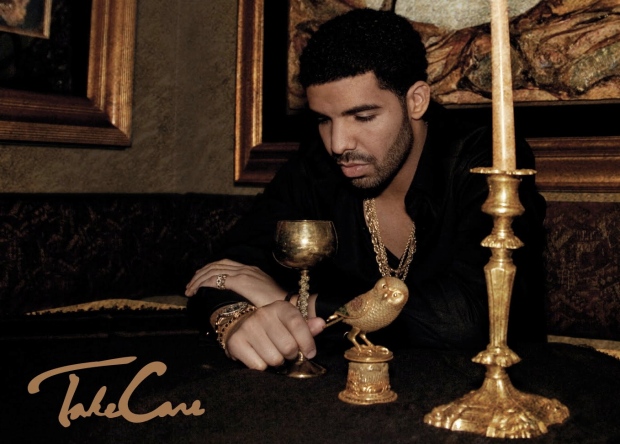 Toronto born and bred emcee drops his long-awaited sophomore album, Take Care. Originally scheduled for an October 24th release, the theme of the record graciously moved the date to November 15. Drake expressed that he feltThank Me Later was rushed and not quite what he had envisioned. No mistakes this time around.

There’s no lack of growth and maturity embedded into this script. Drake plays within his strengths and weaknesses. Slow heart-pounding melodies met with long-winded hooks, and crisp, piercing beats accompanied by an unmistakable stiff flow. Executive producer and right-hand man, Noah “40” Shebib left obvious fingerprints all over the record. Since day one, 40 has been Drake’s number one soldier. Their chemistry and brotherhood plays a strong role in the music. During an interview with the LA Times, Drake was asked if the label wanted him to go after big-name producers, he responded with “To me, I have the best producers around me, period.”

1. “Over My Dead Body”
Alternate title: “Fireworks Pt. II.” Despite wanting to open up Thank Me Later with ‘9 AM In Dallas,’ I thought the deep piano, soothing beat and Alicia Keys on the chorus was perfection. Take Care similarly opens with soft piano, and underlining synths to make way for a look into what fame can bring you, with a hint of reality “And I was drinking at the Palms last night/And ended up losing everything that I came with.”

2. “Shot For Me”
A ballad chalked full of ex-girlfriends. Dominated by the drum-kit, a soothing 80’s sound and some wood-block sounding snaps. Confessions of commitment and never cheating leave a handful of broken hearts out there, including Drake. The constant talk of being too soft was addressed in a recent interview with The Times, “the greatest musicians have used melody to connect with the world/I just have different ways of expressing myself.”

3. “Headlines”
The lead single comes in flaring with a Boi-1da/40 production collaboration. Not necessarily a traditional single from our Toronto emcee, nonetheless, successful. Receiving immense amounts of hype from blogs, radio and statistically it exploded. His second highest debut on Billboard charts and received Gold Certification (RIAA) two weeks before the LP even hit shelves. Expressing the progression of life in the spotlight and being entrapped in this industry; Drake puts it plainly for us.

4. “Crew Love”
An unexpected, in-your-face heart pounding drum sample to start it off, followed by the rough, yet eloquent voice of fellow Toronto native singer/songwriter and Polaris shortlist nominee, The Weeknd. Shouting out your “bros” or “crew” is classy and appreciated. Dropping $50k on a vacation for them is pure love.

5. “Take Care”
Jamie xx (of The xx) remixed the late Gil Scott-Heron’s last album I’m New Here. The song “I’ll Take Care Of U” features a mysterious, ambient instrumental from Jamie and the raw, unmistakable vocals of Mr. Scott-Heron. It’s an uplifting ode about trust and honesty, and the hope you can indeed still believe in humanity. Rihanna definitely fit the lyrical role to perfection.

6. “Marvins Room”
How many artists can get away with a 6-minute, sleepy-beat track about how empty they’ve been feeling lately? The heavy bass line almost trumps an ex-girlfriend being told she could do better. People find it difficult to express loneliness, let alone produce it and throw it on a record. Drake is valiant when it comes to expressing these feelings. “I’m lucky that you picked up, lucky that you stayed on/I need someone to put this weight on.”

7. “Buried Alive Interlude”
Followed by a grandiose piano instrumental, ominous synths make way for Compton rookie emcee Kendrick Lamar. He spits a quick short story about how fast the industry swallows you up. “So dig a shovel full of money, full of power, full of pussy, full of fame/And bury yourself alive, then I died.”

8. “Under Ground Kings”
The award for “Banger of the Record” goes to…
The road to the top is long and traitorous but our Canadian wonder-boy made it. “So I drop out, lessons I was taught are quick to fade/As soon I realize that term-end papers won’t get me paid.” T-Minus & 40 murdered this beat, hands down; I dare you to try and keep your head from bobbing.

9. “We’ll Be Fine”
I can safely say the Young Money crew has slightly surpassed “fine” as a status. An unusual beat selection for Drake but it flows. He’s having fun on this joint. Life is short; live it up is the message here. “The fam here, the drink here, the girls here/Well fuck let’s get it then.” Label CEO and rapper, Birdman aka Stunna concludes with less elaborate words of wisdom.

10. “Make Me Proud”
This joint is a shout to all the ladies out there working hard, doing their thing. This isn’t your classic “Bitches Ain’t Shit” from the Doctor, it’s having a job and being proud of it. “That’s why you want to have no sex, why you want to protest/Why you want to fight for your right/Cause you don’t love them boys.” Fellow label mate and lady of the YMCMB household spit some well-earned fire.

11. “Lord Knows”
Just Blaze graces the record with his presence and phenomenal skill-set. On September 27, he sent out a tweet asking if any gospel choir singers in NY wanted to jump on a record. Can’t secure the sample; why not record an entire choir, casual right? The unphased Jersey produced lit this track up. Cue the wordplay from Rick Ross (Bawse), “I fell in love with the pen, started fucking the ink/The hustle’s an art, I paint it what I would think.”

12. “Cameras/Good Ones Go Interlude”
“Looks like we in love, but only on camera.” This cashmere-smooth beat is perfect for explaining to his girl that there’s no real love on screen. Furthermore, the people uninvolved are left out of the loop, a loop that’s evolved into what is now, his entire life. Good Ones Go includes some fantastic, stretching vocals promoting independence. Subsequently we learn perhaps Drake wasn’t convincing enough on Cameras.

13. “Doing It Wrong”
The ugly truths of relationship’s today are exposed in full bloom. Drake explains it’s not the end of the world; we learn, we grow, we move on and fill our pockets with lessons. Music legend Stevie Wonder graces the industry with an unparalleled harmonica solo to cap it off.

14. “The Real Her”
An expected dark, slow rolling beat from 40, overflowing with chopped piano, sharp snares and talk of the women Drake and fellow rappers fall for. Weezy adds some colourful freestyle, except for the lack of taste in the blind Stevie Wonder joke (he’s on the record Wayne). André 3000 empathizes with Adele over heartbreak and expresses it with a pouring honey flow.

15. “Look What You’ve Done”
This soulful, nostalgic ballad is devoted to thanking his family. He reminisces on pre-fame days and family issues that almost anyone can relate to. Your home molds you into the person you become. Drake accepts this and recognizes all the encouragement, “I could do anything/You said that and you meant that.” It concludes with his grandma on the phone thanking him for taking such good care of her.

16. “HYFR”
The freestyle feeling is reminiscent of the unreleased 2009 collabo “Stay Late.” Drake opens with a couple fire verses and quick quipped conversational dialogue inspired by Wayne’s verse on the remix of Mario’s “Crying Out For Me.” The “anthem-induced” chorus is basically Wayne and Drake patting each other’s backs, exclaiming, “We made it!”

17. “Practice”
Who knew you could take Juvenile’s 1999 #1 hit and make it sensitive and warm. 40 turns down the tempo and smoothes out those rough edges. Drake adds depth and character “I’mma trust you/I’mma give you the benefit of the doubt/ And I’mma love you.”

18. “The Ride”
For any practicing artist, the days begin to roll into each other and the mind embarks on self-inflicted journey of madness. Doc McKinney took the reins on this luxurious beat. This rant about the downfall of fame is accompanied by soothing vocals from The Weeknd.

19. “The Motto”
This upbeat track wedged itself between a group of slow-rolling R&B tracks. T-Minus lined this trunk-rattler up for a Drake/Wayne freestyle. Their motto is live life to the fullest and represent the team, “YMCMB, you ni**as more YMCA.”

20. “Hate Sleeping Alone”
The record finishes with a deep, dark, honest truth about Drake many people can identify with. He’s showing there’s more to rappers than just sex, drugs and rock ‘n’ roll, they have feelings like you and me. “I hate sleeping alone/Half the time we don’t end up fucking/I don’t ask her for nothing.”

There’s a lot of complaining that there are too many feelings involved in this record and not enough rap. That’s not the case;Take Care is a journey about growing into yourself and learning from mistakes. Who doesn’t love a great upbeat hip-hop record, packed with bangers, but this is something different, something special. Being able to identify with many of the personal endeavors expressed over the last 64 minutes is something unusual.